As a mixed dairy and sheep farmer we were looking for alternative housing for our sheep. We were recommended by a fellow sheep farmer to self-construct an AG Polytunnel which we found to be the most economical and viable option for us.

The delivery service was second to done and the customer service and after care excellent. The one negative was that construction instructions were limited, but that was compensated by the personal telephone communication from AG Polytunnels.

Would highly recommend to others. 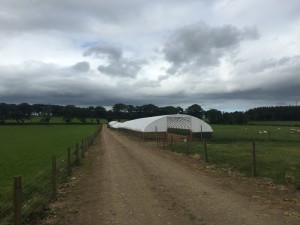 Fruit set is very good, better than I had expected, given the different environment than normally experienced under glass. Thank you, Richard

Nick and Mimi Hart and their flock of pedigree Charollais sheep

Our farm has water meadows that are not available for use in the winter for grazing due to the risk of flooding and the proximity of the river.

The very wet winter of 2013/2014 made the management of our 120 ewes and 50 followers very difficult -feeding outside was almost impossible! We managed to move our fodder to a neighbour so that we could make use of the additional building and bring the twins and triplets inside for January and February. This experience made us consider other options for the next lambing season .With this in mind we went to the NSA show at Malvern. We looked at three options for Poly tunnels and decided upon Allan Godber's. We found Allan to be most helpful with the design and location as well as his competitive pricing.

We had the site prepared in early November and the tunnel erected in late November.

Although the winter was much better than 2013/4 we still brought the twins inside in late January.

We had 70 ewes in the 54x30ft sheep housing tunnel with feed barriers and big bale hay rack. This afforded the ewes plenty of space. They were extremely comfortable. One end of the polytunnel is closed but we still had plenty of ventilation.

The advantages of this system are many. Feeding is much easier, observation of the sheep is improved and as such the overall management and welfare of the sheep is enhanced. After lambing we had 40 ewes and lambs back in the polytunnel. We found this to be very helpful in giving the lambs a good boost prior to turn out. We believe that both us and the sheep have been happier.
We also think that having the bulk of the ewes off the land for the latter part of the winter has improved the early grass.

All in all the experience has been a very good one . Mimi is convinced the sheep are more relaxed and content because they can see out through the mesh side and watch the world go by, as well as having a good flow of fresh air!